Paris, Lisbon and Shanghai-based practices Jacques Ferrier Architecture and Sensual City Studio have turned what could have been an ordinary ‘office plus car park’ into an opportunity to radically reassess the surrounding urban district of Xujiahui in Shanghai.
·  A radical reimagining of a densely urban site on Shanghai busiest intersection
·  The project features elevated planted pedestrian walkways above the street
·  An ‘urban oasis’ from which to observe the dynamic scene below

The resulting structure, on the site of a former hotel, combines office, civic, commercial and cultural space with green ribbons of public walkways, connecting the streets and buildings of China’s busiest intersection with peaceful arteries from which to escape the tumult. The design explored ways in which the project could become a generous catalyst for the wider environment, building pedestrian connections, walkways and bridges above the transport interchange as an extension of the building; in doing so, renewing the local infrastructure. Through extensive analysis, Jacques Ferrier, founder of Jacques Ferrier Architecture, and Pauline Marchetti, co-founder of Sensual City Studio, identified the need for enhanced pedestrian connectivity at the intersection and incorporated this into the building’s car park. 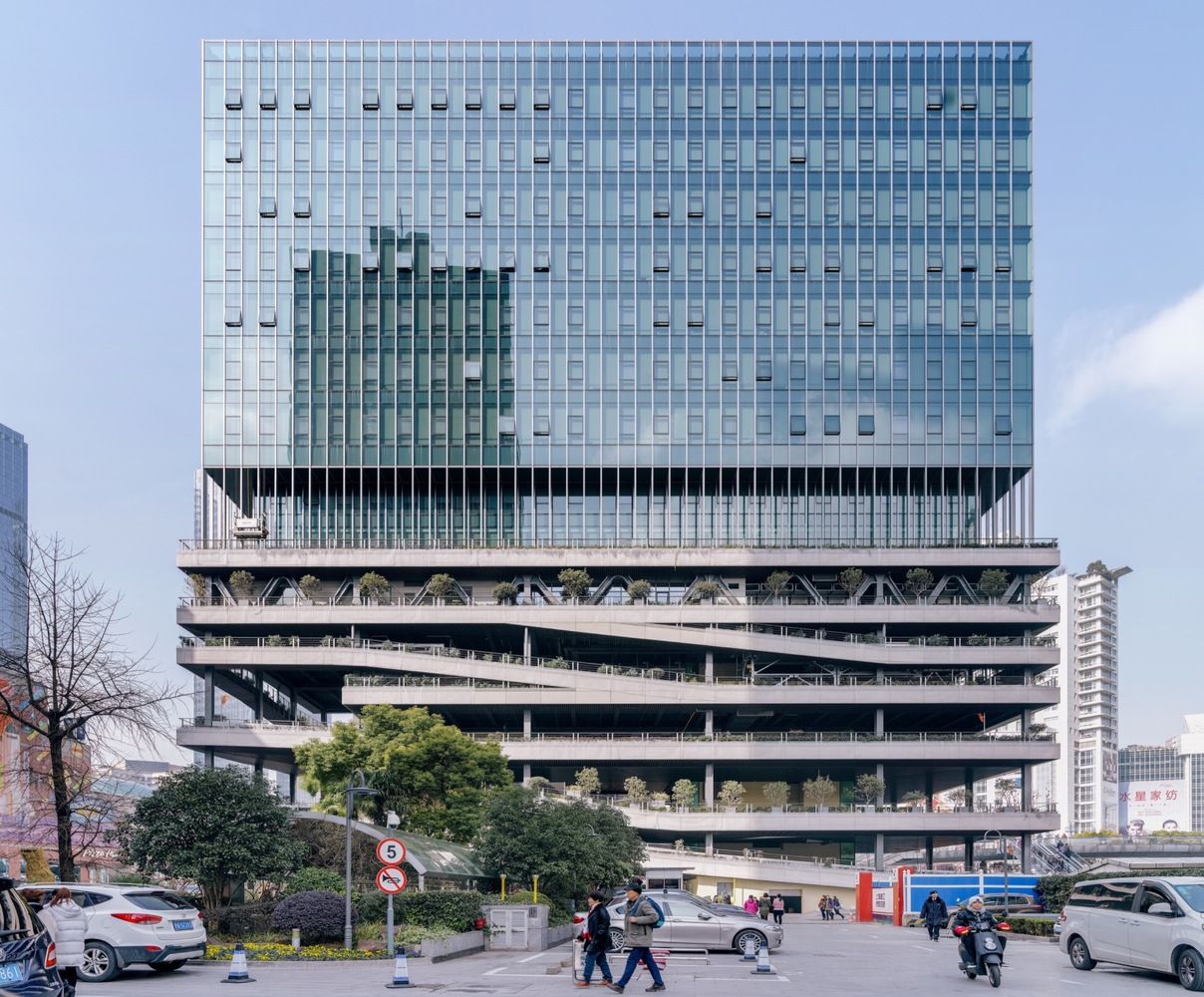 The radical intervention creates raised and planted walkways which lift pedestrians eight meters above the crossroads to provide more logical and enjoyable connectivity between city landmarks such as the church and the park. The project includes two levels of commercial space underground, one of which is connected to the Metro City building by an underground gallery. Floors 1 and 2 house several hundred square meters of community spaces. Floors 3 to 7 house the public car park, which unfolds in the form of a continuous spiral, serving the offices and businesses of the district.

The 8th and 9th floors are shared office space arranged around a large raised garden, and house reception for visitors, cafeteria, meeting rooms, auditorium and spaces for relaxation and conviviality. Levels 10 to 15 have been developed as efficient and user-friendly office floors. The top two floors are home to the cultural center, space that seemingly “floats” on the skyline of the district. As a piece of architecture, T20 expresses the movement and dynamism inherent in the site: its circulation and activation through human use, across the bridges that connect to the city and at the ground and first-floor level where public facilities and shops are located.

The car park becomes a lush urban oasis for the city, with the insertion of an extraordinary “hanging garden” that is visible from key public spaces. This combined approach by Jacques Ferrier Architecture and Sensual City Studio has brought nature into even this most densely populated area, through suspended gardens and plantings throughout the scheme which will help to counteract some of the inevitable pollutions in the area. Balancing dynamic movement and respite, the building reintroduces therapeutic nature into the urban condition by offering a garden to the city in this intriguing layered approach to city architecture.