Located in Shanghai’s up-and-coming North Bund, Tapa Tapa is a Spanish tapas and wine bar in which traditional snacks are re-interpreted and enjoyed with a view. Originating in Spain as a mixture of bar-hopping and eating, tapas culture has long since travelled the world adapting to different cultures and lifestyles by offering to fill the gap between after-work and formal dinner.

In contrast with the looks of both traditional Spanish restaurants and the ubiquitous industrial-chic eatery, Quarta & Armando’s proposal pairs tapas and drinks with colors and textures belonging to the mercado as much as to Shanghai’s gleaming skyline.

The strategy defining the space considers two basic modules each affording two to six seats. Each module is conceived as a three-dimensional slice of a Spanish taberna and copy-pasted adapting to the long, irregularly shaped site in order to offer to each table its own unobstructed view on the Hungpu River. 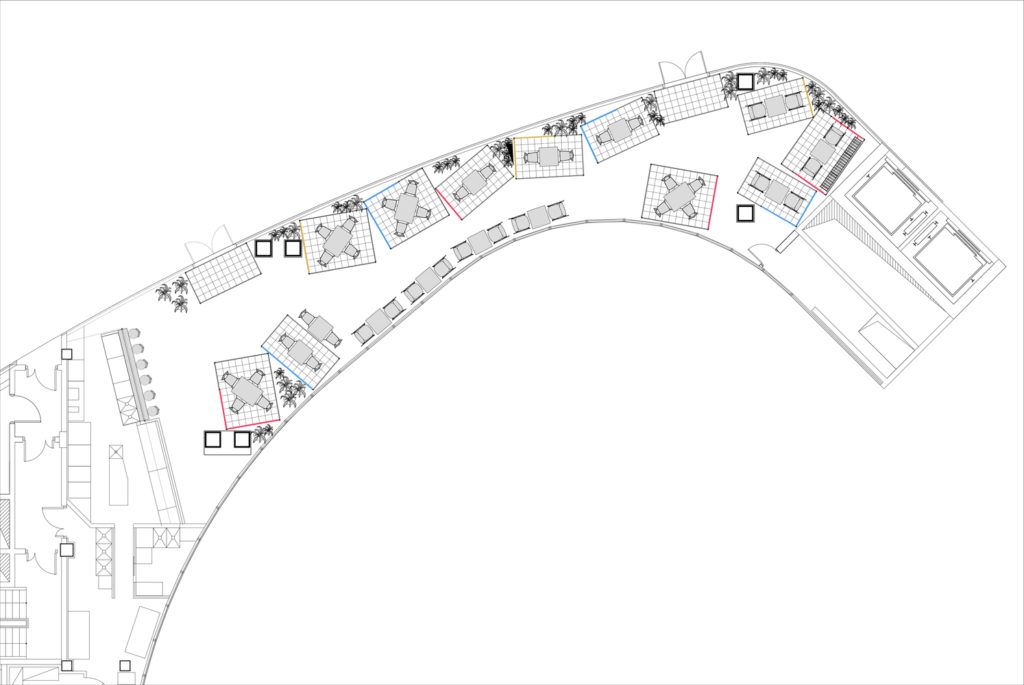 The use of few simple materials combined with a color palette based on primary colors offers a naive reinterpretation of vernacular motives. Aggregated in small clusters, the “open rooms” form a miniature village that praises openness and communality. The steel-framed polycarbonate panels separating each “room” from the next one define different depths throughout the whole space while letting sunlight shine through during the day.

On the floor, printed ceramic tiles with custom-made illustrations contrast with the grey concrete flooring. The same principle is then reflected on the ceiling completing the virtual separation of “indoor” and “outdoor” space.Towards one end of the site, a small cluster associated with a custom-made wine rack defines a more private space dedicated to wine-tasting.