The Aoyama-Harajuku-Omotesando area is the birthplace of culture and fashion, and a showcase of trendy and state-of-the-art architecture. A string of chic boutiques sits between swanky jazz clubs and bank balance-bashing restaurants. The likes of Miu Miu, Gucci and Dior have teamed up with world-class designers to transform the area into a living architecture museum. But perhaps you could also say it highlights Japan’s tendency to create the exemplary out of the ordinary.

We’ll start at the site of the spectacular building of SunnyHills Minami Aoyama Store (Kengo Kuma). This shop, specialized in selling pineapple cake (popular sweet in Taiwan), is in the shape of a bamboo basket. It is built on a joint system called “Jiigoku-Gumi,” traditional method used in Japanese wooden architecture.

In a short walk we’ll arrive at Spiral Building (Fumihiko Maki), a multi-use building. The defining feature of the building is a seemingly floating spiral ramp.

On the other side of the street there’s AO Building. With its striking silhouette, this shopping and office complex stands out against the Aoyama skyline. The building was completed in 2009, designed by the architectural firm of Sakakura Associates.

Crossing the streets with lots of fashion and interesting stores we’ll arrive at Omotesando Hills (Tadao Ando), a mixed used complex consisting of 130 shops and 38 apartments housing and just in front of it the Japanese Nursing Association (Kisho Kurokawa). The main theme of the design is how to realize the symbiotic harmony between the building and Omotesando.

We’ll end seeing the store Dior Boutique Omotesando (SANNA) and GYRE Building (MVRDV). By gradually twisting the floor plates around a central atrium, a series of terraces emerge, connected by stairs and elevators that are positioned outside the volumes.

The tour can be extended to 8 hours (full day tour). We’ll continue seeing buildings in the area:

Starting at RAGTAG Harajuku (SANAA). The elevation with frosted glass perfectly characterizes Sejima’s minimalist style. The translucent facade creates a specific light ambiance in the interior space. Behind this building there’s Omotesando Branches (Sou Fujimoto), a 4 storey multipurpose space including retail store, office area and a residence with a tree-shaped structure creating a three-dimensional garden on its façade.

We’ll walk to Tokyu Plaza (Hiroshi Nakamura & NAP), a beautiful new urban roof garden on top of Tokyu Plaza Omotesando at Harajuku. The public space is designed to offer shoppers a place to relax, and the lush terrace features plenty of trees, tables and steps where people can meet, sit and enjoy a meal.

Located in Harajuku, The Ice Cubes (Jun Mitsui & Associates Architects) became a particularly cool architectural design that made people remember this building in the middle of a fast changing trendy area.

Next to Takeshita Street there’s the imposing building of TOD´s (Toyo Ito). Since the site is L-shaped and has a narrow frontage, in order to give the building a unified volume the architect enclosed the site with a wall that gives the impression of a row of zelkova trees. Right by its side there’s Boss Store Tokyo Omotesando also known by Omotesando Keyaki Building (Norihiko Dan and Associates). 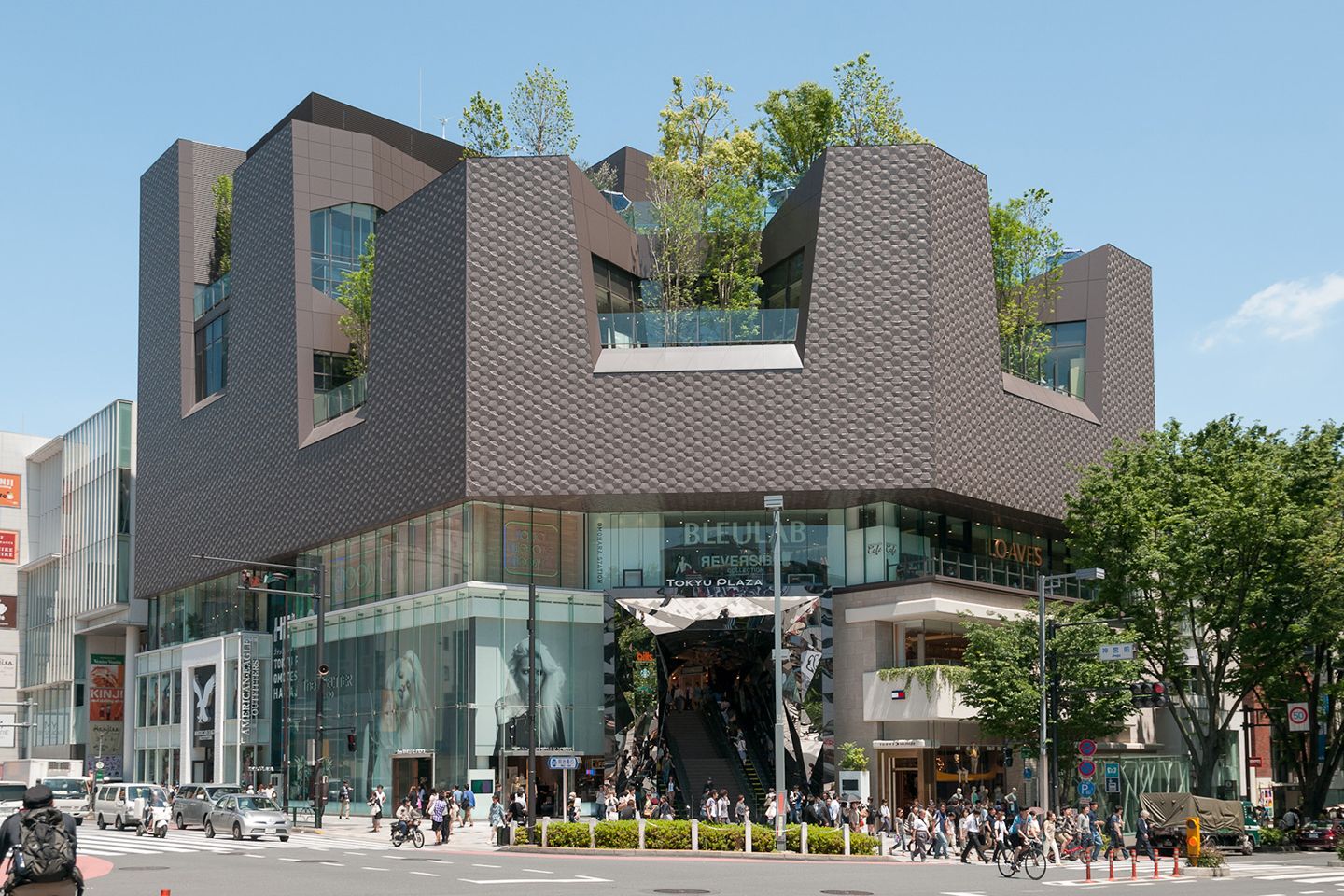