Discover this day tour in Shanghai and explore the mix between tradition and modernity with interesting visits along with a professional guide-architect who will join us throughout the itinerary.

China is not only an emerging world power but also a country that has suffered a transformation in the recent years, which has left a deep mark on its most recent architecture. In Shanghai, the Universal Expo in 2010 increased activity for the architecture studios involved, such as Herzog & de Meuron, Zaha Hadid and OMA.

Our tour guided by an architect will take us along the pedestrian Street Nanjin, full of shops. We will visit part of the old town, the boardwalk on the Huangpo River and the Yuyuan Garden. We will cross the river for a visit to the observatory of the Shanghai World Financial Center in the financial center Lu Jia Zhui, to the Jin Mao Tower of Skidmore, Owings & Merrill or to the Oriental Pearl. We will approach the Pudong neighborhood, full of skyscrapers. Toyo Ito, Massimiliano Fukas, Richard Rogers or Dominique Perrault have made their proposals for this area that we can cover in our tour.

Tradition and modernity unite in this country in constant evolution. Discover this day tour in Shanghai guided by one of our professional architects. 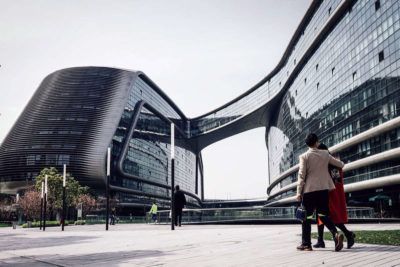