Iran is a country that has had a very important cultural and architectural influence throughout the Islamic world with the different styles of Iranian architecture in the different eras of its existence. Its traces can be seen throughout the Islamic world in its mosques and civil constructions. But after the 1979 Iran revolution, with its capital Tehran, they projected a more modern vision in its buildings for the new country that has led to an architectural renaissance in the main city of the country that complement with modernity the already nurtured historical heritage of this interesting country. 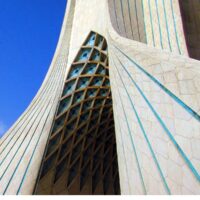