Skip to content
Home » Saudi arabia » THE LINE, THE FUTURE METROPOLI WITHOUT CARS NOR STREETS IN SAUDI ARABIA
Previous Next

THE LINE, THE FUTURE METROPOLI WITHOUT CARS NOR STREETS IN SAUDI ARABIA

The project is based on the idea of a city surrounded by mirrors, completely efficient and intelligent, without cars or streets in the middle of nowhere. This vast Middle Eastern country has launched one of its most ambitious plans:

The Line, a huge linear metropolis 200 meters wide and 170 kilometers long, above sea level, like a long metal line. Apart from its strange measurements, it will be covered by millions of mirrors only visible from the outside.

Inside the city, you can find a stadium to a marina in the Red Sea and, of course, an airport connecting with the rest of the country. The city is designed to accommodate up to 9 million people and will extend for an area of just 34 square kilometers.

Designed by NEOM, a company owned by Saudi Arabian Crown Prince Mohamed bin Salman, The Line will be a sustainable and intelligent metropoli. The goal is to make the city operational by 2030. The boosters have launched an international announcement to attract funds to create this futuristic metropolis, as the project is in the process of seeking funding.

One of the major challenges facing large cities is climate change. Its effects are already being felt in some areas of the world, either by rising sea level or by meteorological phenomena, increasingly extreme (heat waves, floods…). This is precisely one of NEOM‘s main concerns. 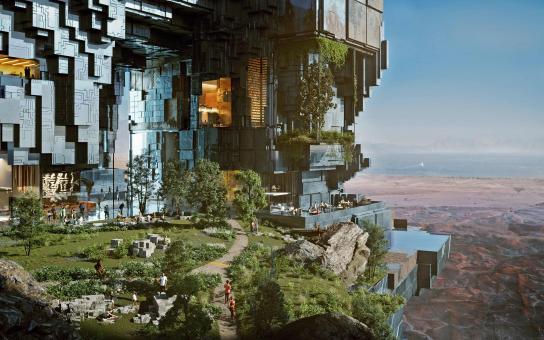 The Line will operate on 100% renewable energy, with fully efficient water systems. According to the official Saudi Press Agency (SPA), “It will give priority to people’s health and well-being over transport and infrastructure, as in traditional cities.”