An architecture pavilion made of plywood, named as Plywood Theater, has been installed inside the Main building of BDT in March of 2019 and is dedicated to the 100th anniversary of the theater. An invasion of a plywood assembly into complete and canonical space of a classical theater of XIX century returns its observer to 1919, in the revolutionary time when Bolshoi Drama Theater was born. The architectural solution of Plywood Theater refers to works of visual art by the follower of Suprematism, El Lissitzky (“Beat the Whites with the Red Wedge”).

The Plywood Theater is a dedication to famous artists who has been working in BDT since its foundation: Vladimir Shchuko, Mstislav Dobuzhinsky, Alexander Benoit, Yuri Annenkov, Boris Kustodiev, Kuzma Petrov-Vodkin, Alexander Samokhvalov, Nathan Altman, Leonid Chupyatov and many others (memorial marble plates in honor of the artists are installed on the wall of the Plywood Theater). The Plywood Theater – it is a theater inside of the theater, a game with a space, exit beyond the boundaries of so-called “common sense”. 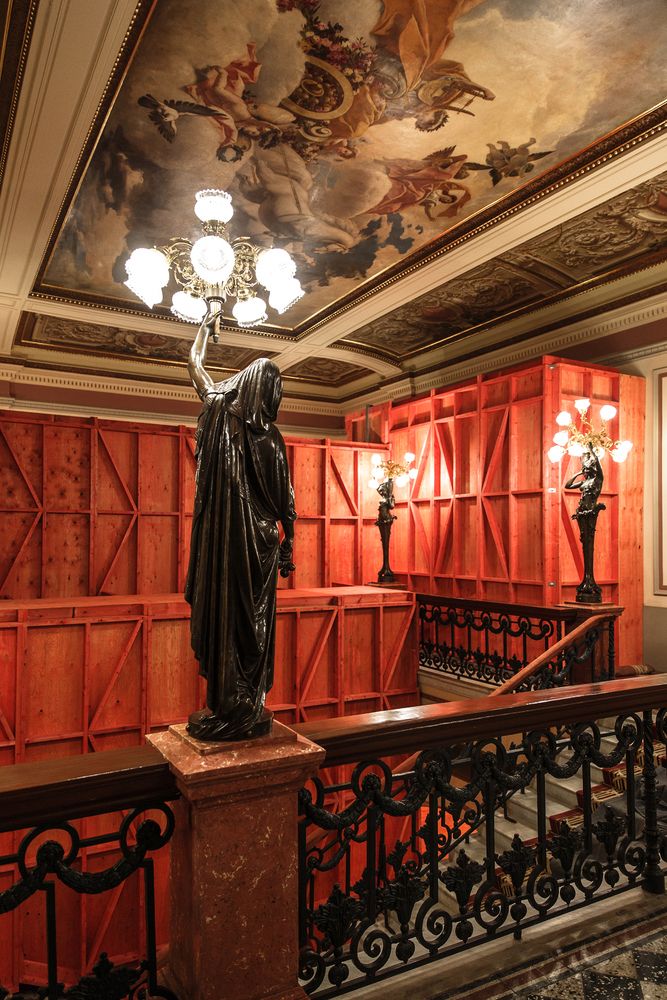 The Plywood Theater has a separate entrance, wardrobe for 30 persons, foyers — lower & upper, an auditorium and a stage. Height of the proscenium opening: 1,40 m. Therefore an actor standing at the proscenium is not seen upright, he is always seen without a head. The stage itself has a form of a triangle and what is called the rear of the stage at the regular theater – here it is a corner of an oblique triangle. You can fit yourself in this corner, stand up there, and then you will be seen entirely, but only standing in the corner.

The Plywood Theater — is a perky nose of Buratino. According to a theater legend – Alexey Tolstoy’s “The Golden Key” characters has been inspired by his contemporaries. Papa Carlo and Giuseppe — it’s Stanislavsky and Nemirovich-Danchenko. Karabas-Barabas, who wrapped himself with his beard and, not to step over it, put it into his pocket – it’s Meyerkhold with a long scarf which he also used to put into the pocket. Buratino, Malvina and Pierrot — writer Maxim Gorky, actress Maria Andreeva, and poet Alexander Blok. In 1919, this trio had established the Bolshoi Drama Theatre, where Blok became the first artistic director. As it happens — BDT has been established by Buratino, Malvina and Pierrot. 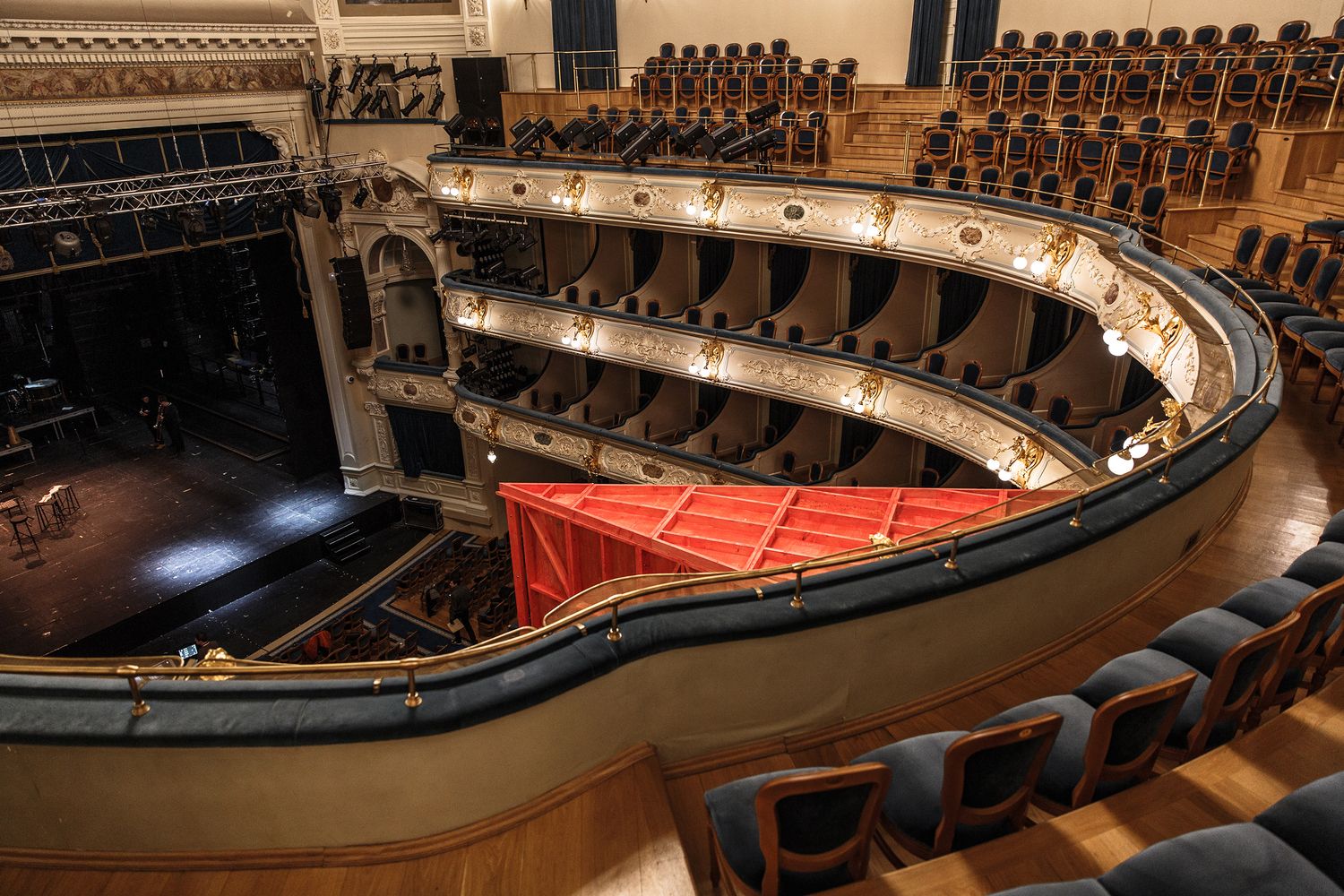 One of the creators of the Plywood Theater, an artist Alexander Shishkin-Hokusai, says that plywood is like a kind of skin — ready to receive any violence to itself: wounds, twisted screws, nails, paint, decoration. The first concept of the Plywood Theater was called “Theater of the future” — an empty, clean space, which will be filled with senses, infiltrated with right energies. The architectural solution of the Plywood Theatre is determined not by the comfort of operation, but by the symbolism of ingression, by the conflict between new and old.

This architecture connects with ritual and has a non-utilitarian, sacral nature. A black cube assembly inside of the Greek foyer of BDT has been compared to Japanese Kodo, Muslim sanctuary of Kaaba, Sumerian ziggurat — a “road to the sky”. There are monuments of Gorky, Blok, Tovstonogov, and a golden chandelier in the Plywood Theater – these are belongings of the old theater on Fontanka river embankment, the “birthmarks” which had appeared, grew on the body of the new, plywood theater. There are “windows” – “wickets”, cut in plywood sheets facing to the space of the old theatre. “Wickets” are the connection, the navel cord, the birth, they make the plywood theater space more transparent, connect it to the outside world, to the body of the big theater.