The New York branch of architecture firm OMA has unveiled its design for the extension to the city’s SANAA-designed New Museum.

OMA has designed an angular addition to double the size of the contemporary art museum, which Tokyo-based architects Kazuyo Sejima and Ryue Nishizawa of SANAA completed in 2007 in Lower Manhattan.

New facilities will be housed in an angular structure encased in laminated glass with metal mesh. The design is intended to be complementary but distinct from SANAA’s building, which comprises irregularly stacked volumes, also wrapped in metal mesh.

“Our new building establishes its own distinct identity yet it is highly connected to the existing museum,” said OMA New York partner Shohei Shigematsu. 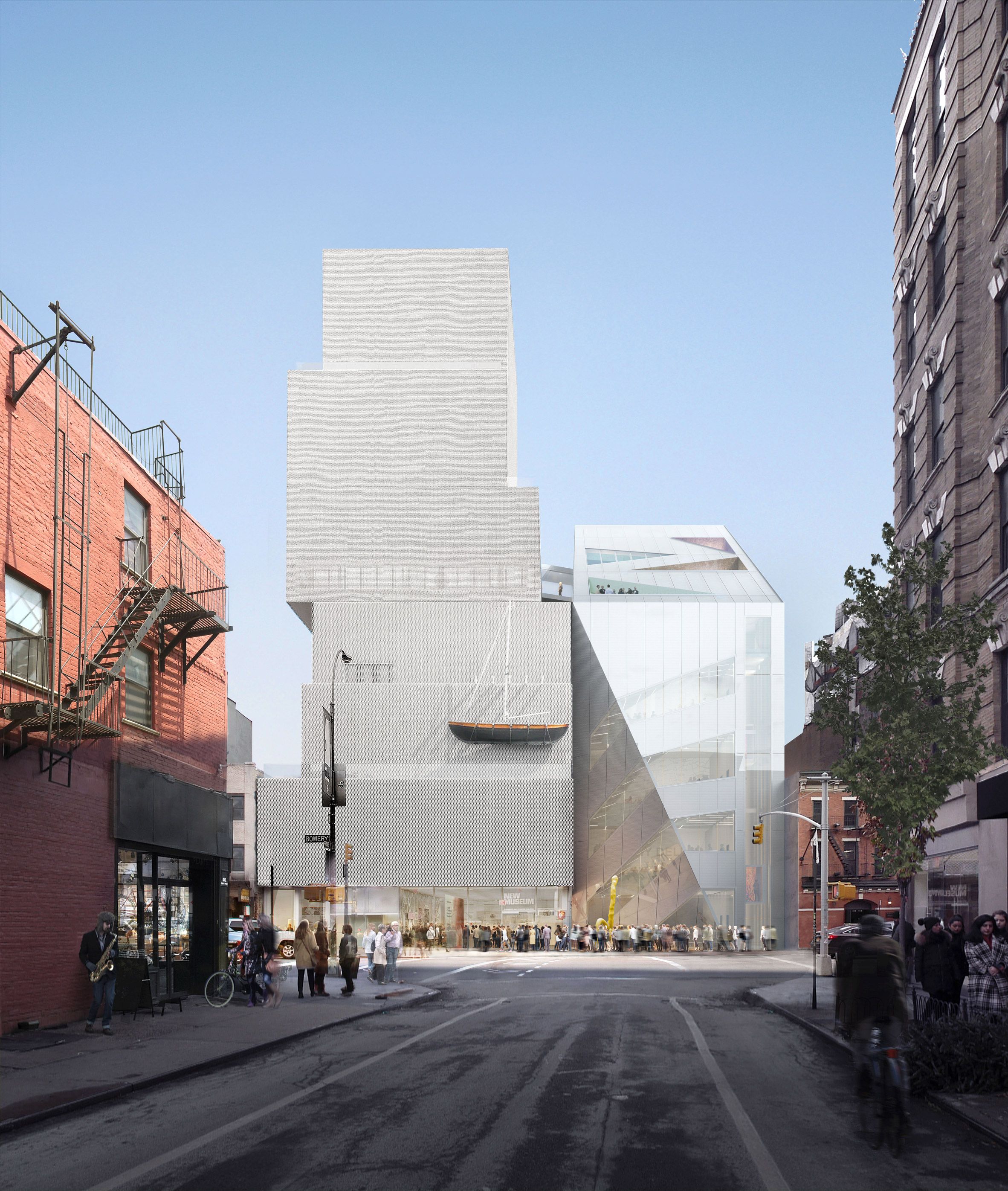 First announced in May 2016, the addition will replace a building at 231 Bowery, which currently hosts the museum’s New Inc start-up lab and storage for artworks.

It will be shorter than SANAA’s seven-storey stack, and instead make up extra space by extending deeper towards the rear of the site.

OMA has sliced the front of the building to create space for a street-level plaza, while the angled top half will be punctured with triangular terraces that offer views of the surrounds.

“We wanted to create a highly public face – starting from the exterior plaza and atrium stair to terraced multipurpose rooms at the top – that will be a conduit of art and activities that provides an openness to engage Bowery and the city beyond,” Shigematsu said.

A stairwell will occupy the front angled portion, forming a new circulation route that better links the museum with Prince Street and the nearby Soho neighbourhood.

Large, irregular shaped windows will offer glimpses of the staircase, which will zig-zag up the building to provide access to three new floors of galleries – which OMA has designed to line up with the exhibition spaces of the existing museum.

“A counterpart to the existing tower’s verticality and solidity, the new building will expand the galleries horizontally and reveal the vertical circulation through a transparent facade,” Shigematsu added.

Other levels will provide a permanent home for the museum’s arts organisation New Inc and space for community and education programmes.

“The new New Museum will be a synergistic pair working spatially and programmatically in tandem, offering a repertoire of spaces to match the institution’s curatorial ambitions and diverse programmes,” the architect continued.

Additional facilities include an expanded lobby and bookstore, an upper-level forum that links with the museum’s existing Skyroom, a new 80-seat restaurant, as well as back-of-house areas, storage and office space.

Construction on the New Museum extension is slated to begin this year. It will be OMA’s first public building in New York, where the firm set up an office in 2001 to up its presence in the Americas.

Led by architect Shohei Shigematsu and Jason Long, the New York outpost has also recently renovated Sotheby’s galleries in the city and a black Manhattan apartment building, which marks first ground-up structure in the city.