Incorporating the historic setting of the park, home to the eighteenth-century castle LeChâteau de Vidy, was a crucial aspect of the project. Located inside a public space that welcomes a diverse group of visitors, Olympic House becomes an emblematic architectural landmark for the local community, exemplifying accessibility and transparency. The shores of Lake Geneva are a protected area, and therefore 3XN, working with the IOC, approached the project with the intent to achieve the highest level of integration within the surrounding environment. The neighboring Château de Vidy, a building included in the Canton de Vaud’s architectural census, has been renovated, with the original facades restored to their original condition. 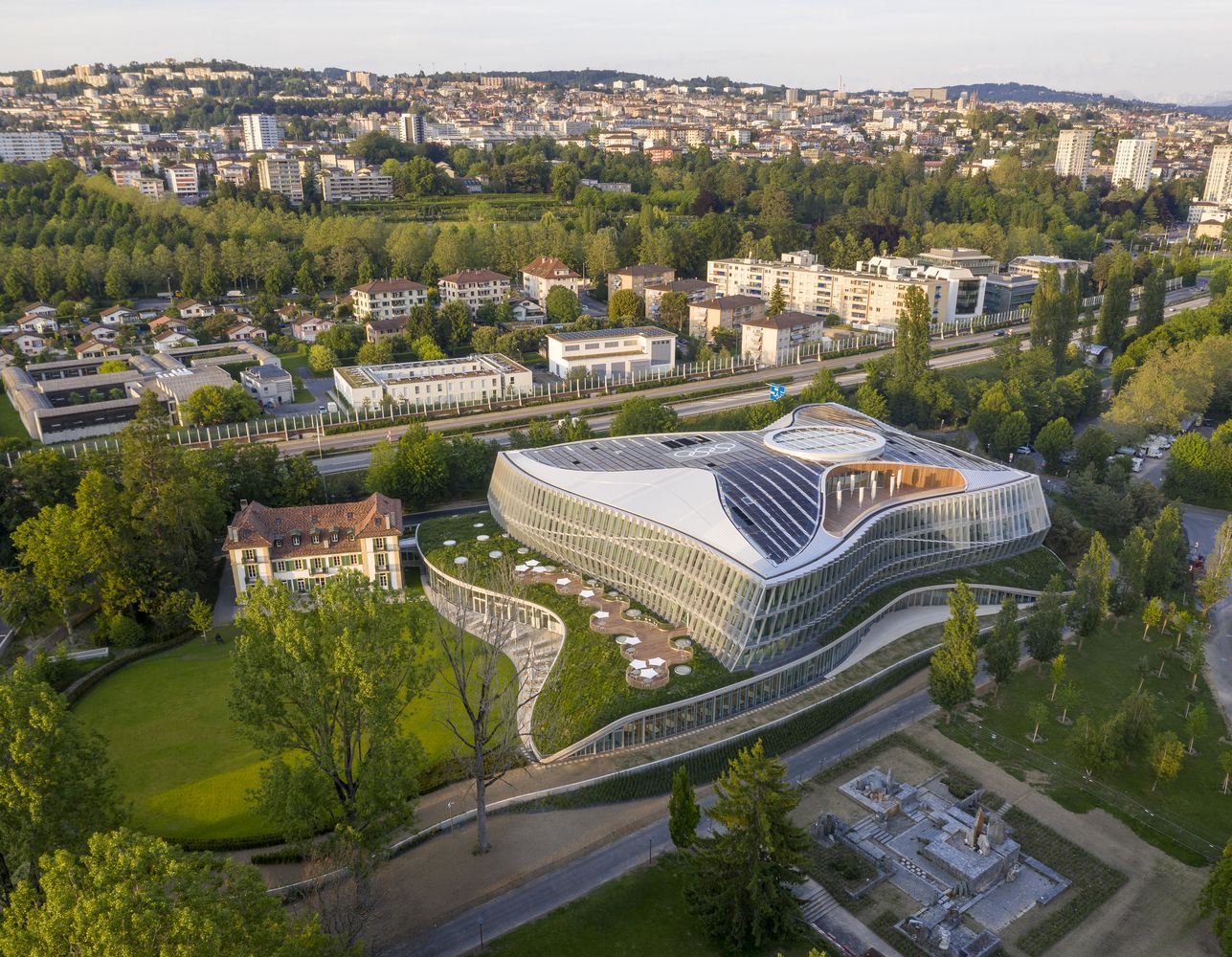 The resultant design respects both the Château’s legacy and the park setting, establishing seamless transitions between the green public space and Olympic House. The positioning of the Headquarters on the east side, combined with the dense grove of trees to the west, results in a reinterpretation of classical symmetry using the Château as the central axis. By consolidating the functions of the current Olympic House and Pavilion, the new headquarters and surrounding landscape provide the same amount of green space on the campus, while more than doubling the square meters of the building. The design incorporates nature and landscape to maximize the beauty of the location, using plant elements of different scales to create paths and viewpoints, while ensuring the preservation of the local biodiversity. A vegetated plinth discreetly blends in with the landscape, minimizing the impact of the building’s footprint.

The building’s transparency symbolizes the openness of the IOC as an organization and provides stunning views of the lake beyond. This floor-to-ceiling, fully glazed façade brings daylight deep into the building while optimizing thermal insulation with a double-skin system. This indentation of the façade allows the park to flow deeper into the office space. The glass construction becomes a metaphor for the IOC’s desire for organizational transparency, reflecting the overall structural changes initiated by the Olympic Agenda 2020. The design allows the daily work and movements of the IOC staff to be visible through the façade. 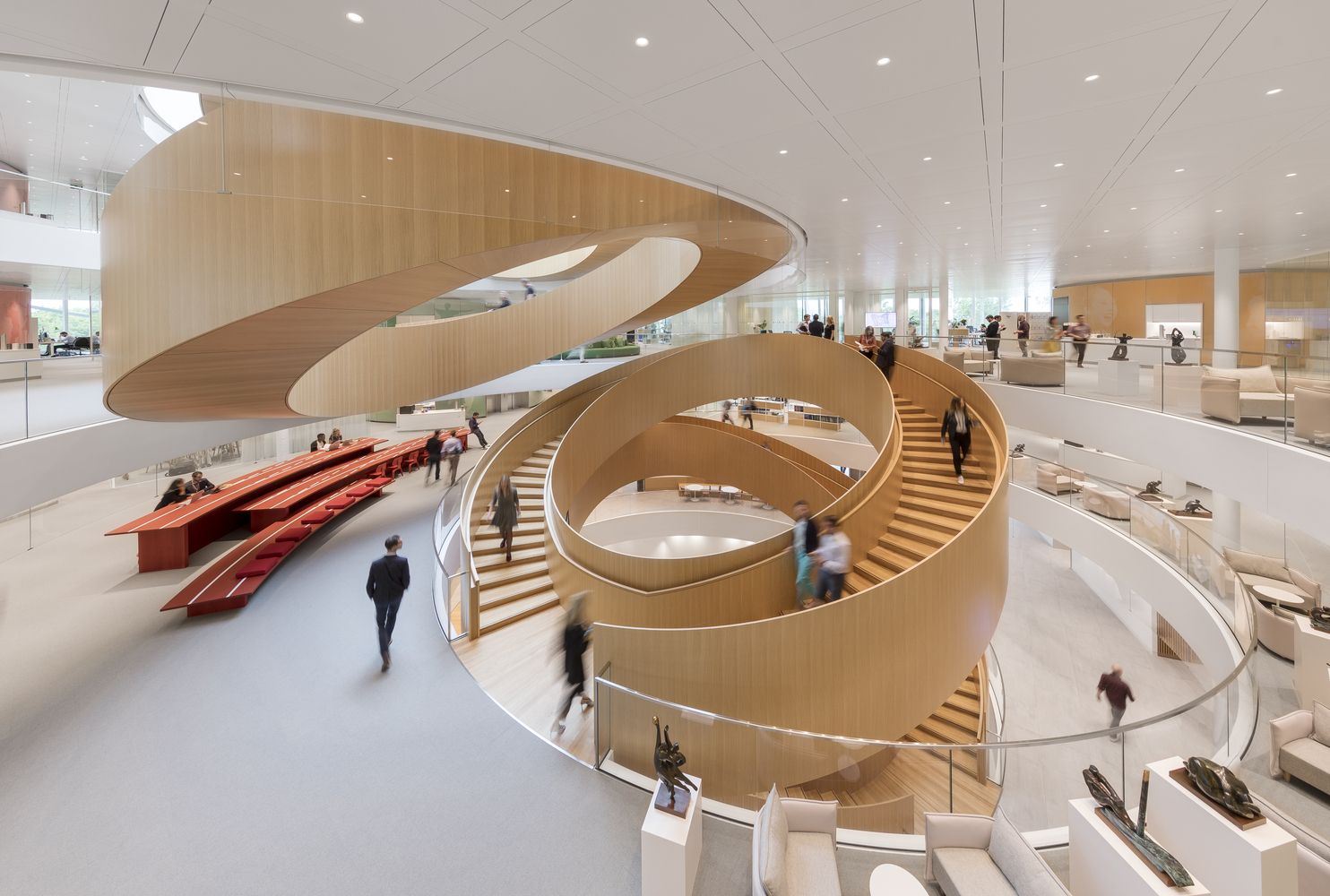 A hallmark of 3XN’s design, the façade pays tribute to the Olympic spirit by emulating the graceful movements of an athlete. The dynamic, undulating flow of the façade appears differently from all angles, conveying the energy of an athlete in motion. In sports, movement leads to optimized performance; likewise, the formal manipulations of the building envelope have a direct effect on the building’s functioning. Olympic House is a global icon and a symbol of the IOC, but it must also function as a busy workplace.

3XN’s central belief that architecture shapes behavior was a primary consideration while conceiving of the new IOC Headquarters. The transparency and flow of the design are intended to facilitate and encourage interaction, communication, and knowledge sharing among the staff. Enhanced circulation will serve as a catalyst for collaboration and solidarity among the workforce. The interior is designed with as few structural constraints as possible: 4 service cores and 14 pillars support the structure of the building. The systematic arrangement of the technical and electrical elements enables an agile working environment, dedicated to a highly mobile workforce that adapts to strategic and organizational changes. With offices that can be easily moved through the open spaces, workspaces can be easily modified according to the ever-changing needs of the IOC staff, encouraging internal collaboration. 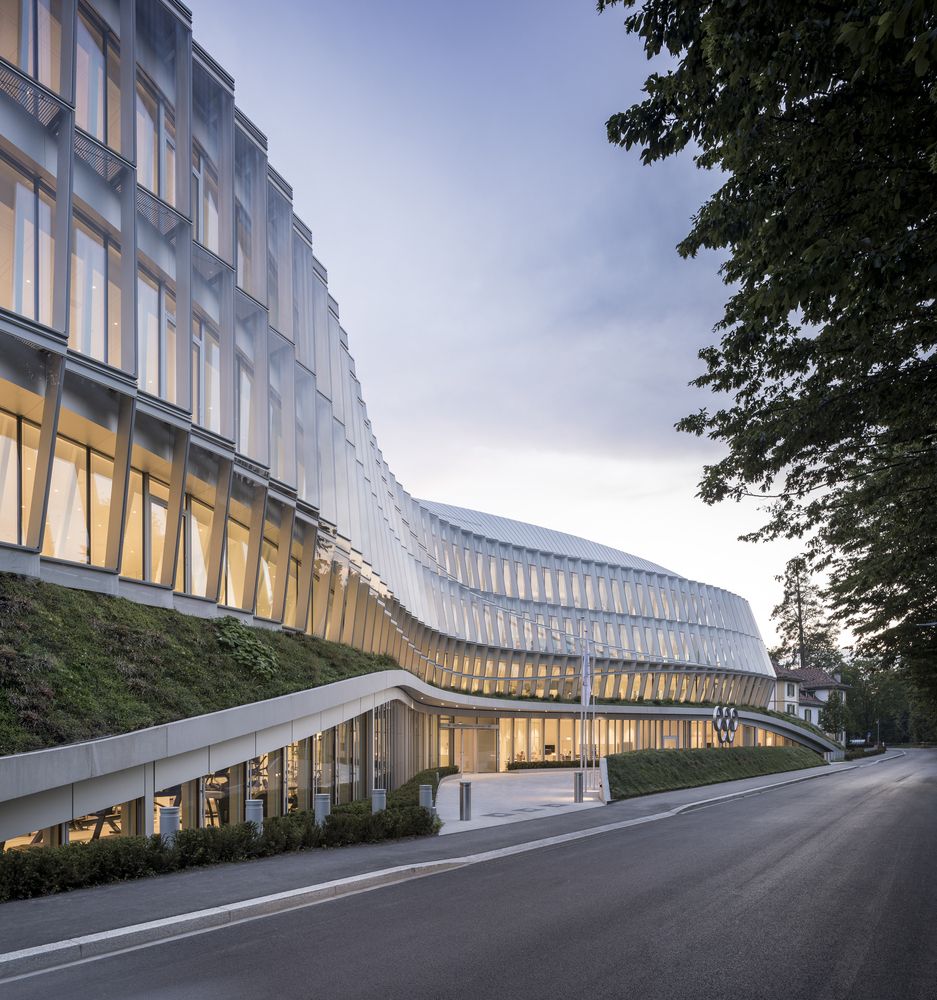 The Unity Staircase, which references Baron Pierre de Coubertin’s Olympic Rings, soars the full height of the building and connects all floors through a central atrium. Following the principles of active design, the oak staircase and its periphery define the central area for social activity and movement. The staircase is a visual expression of the unity and collaboration between the IOC staff and stakeholders. Exhibition spaces, a cafeteria and meeting rooms are also arranged around the central staircase, promoting a sense of community for the 500 regular users. Olympic House is also a unique example of an innovative collaboration between many different stakeholders, including some of the IOC’s commercial partners (Dow, Toyota, and Panasonic), sustainability certification bodies, local authorities, suppliers and academics, as well as the IOC staff.

The IOC’s commitment to sustainability has been integrated by 3XN not only into the design and the construction but also through the development of operational concepts for Olympic House. Through innovative features, the building’s environmental footprint is minimized without compromising the quality of the working environment. The building’s envelope allows for excellent insulation through airtightness and the triple glazing on the internal skin facade. The inner layer of the façade provides thermal insulation while the outer layer enhances the design, protecting the building through an integrated sunscreen system and reducing noise from the nearby highway. The envelope of the building is designed specifically to push and flow inward and outward, gaining additional façade surface area for daylighting and views.