On display through September 29, the exhibition, which features lush gardens, is also the first to combine a horticultural tribute to Burle Marx’s design work with a gallery of his paintings, drawings, and textiles, all of which reveal the connections between his artistic practice and commitment to environmental conservation. It is the garden’s largest botanical exhibition ever, in terms of scope, plantings, and square footage.

Burle Marx (1909–94) was a principal figure in the Modernist art and landscape architecture movement in Latin America during the second half of the 20th century. His vision produced thousands of gardens and landscapes, including the famous curving mosaic walkways at Copacabana Beach in Rio de Janeiro, his adopted home. 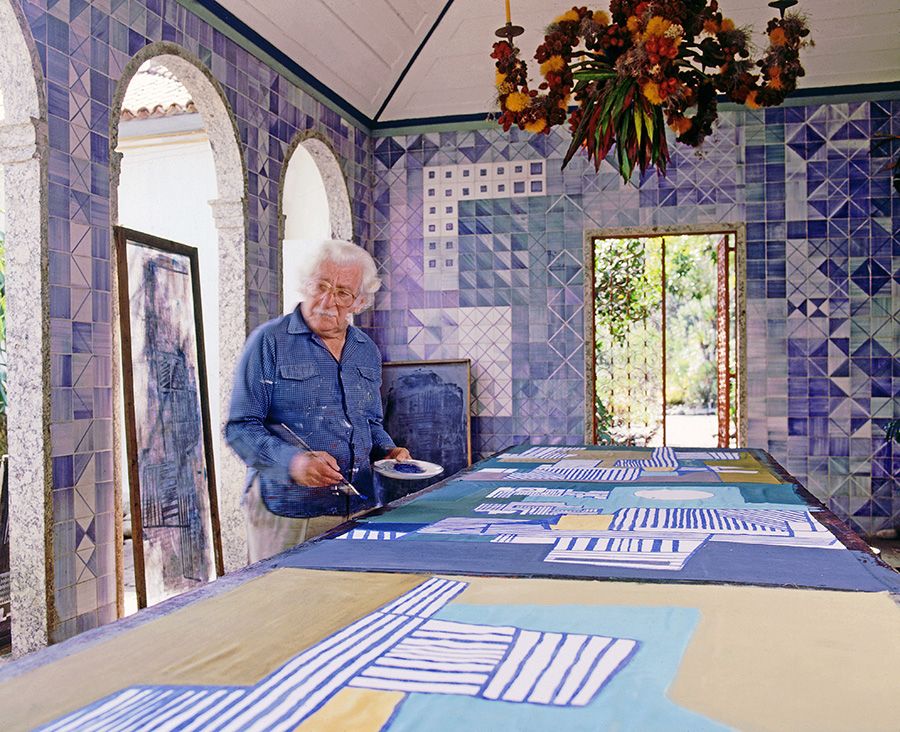 The exhibition highlights Burle Marx’s ideas and oeuvre through installations centered on the Enid A. Haupt Conservatory, as well as a specially planted “Modernist Garden,” which was created by Raymond Jungles, a Miami-based landscape architect and Burle Marx protégé.

In the Modernist Garden—which has been planted on a portion of NYBG’s Conservatory Lawn and whose pavement is reminiscent of Burle Marx’s Copacabana Beach walkways—strikingly patterned paths lead through extensive curvilinear planting beds, bringing visitors to an open plaza with a large water feature framed by a wall carved in relief. (Jungles says the wall is inspired by a Burle Marx installation in the Banco Safra headquarters in São Paulo.) The Modernist Garden’s plant palette includes bromeliads, elephant’s ears, and colorful annuals, as well as mature palm specimens—primarily Brazilian and Caribbean natives—that were imported from Florida.

The Modernist Garden, however, is just one of many tableaus. The “Explorer’s Garden” in the conservatory features tropical rain forest plants and philodendrons. In the “Water Garden,” also in the conservatory, palms establish scale, bromeliads provide texture, and a wall of staghorn ferns lends a sense of botanical whimsy. In the conservatory’s water lily pool, tropical lilies and other aquatic plants favored by Burle Marx are featured, as is a hybrid of the Victoria amazonica, whose leaves can grow up to nine feet in diameter. The gardens in the conservatory were designed by NYBG staff with Francisca Coelho, retired NYBG vice president for glasshouses and exhibitions. 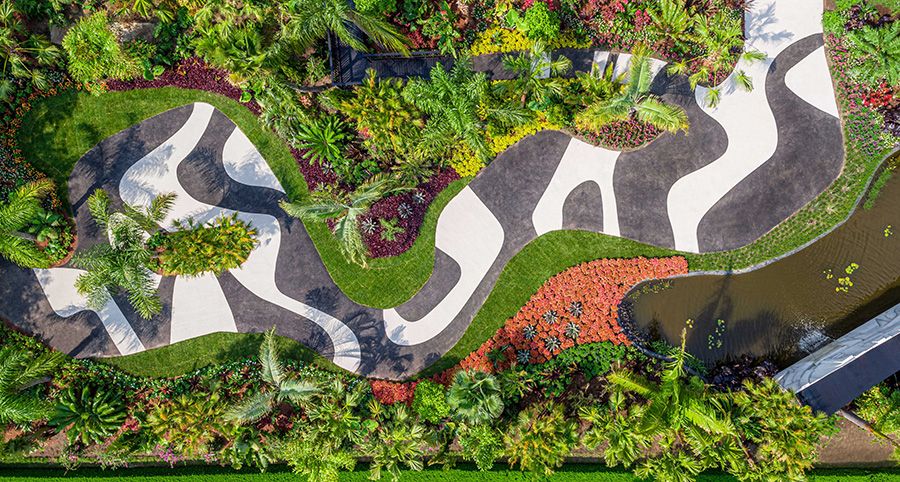 In the LuEsther T. Mertz Library’s Britton Rotunda area of the gardens, the exhibition’s “Art of the Sitio” brings to life the Sítio Roberto Burle Marx, the Rio estate that the artist purchased in 1949. The Sitio houses a nursery, multiple gardens, greenhouses, studio, and Burle Marx’s home, where he entertained friends and colleagues, including the likes of architects Lúcio Costa, Rino Levi, and Oscar Niemeyer, and landscape architects Conrad Hamerman, Haruyoshi Ono, and Jungles. Adjacent to the “Art of the Sitio” is a gallery that explores plants of particular ethnobotanical and economic importance in Brazil, including Burle Marx’s own botanical study of Brazilian plants and the work of NYBG’s scientists in the region.

Jungles first learned of Burle Marx in a college textbook while he was studying at the University of Florida. The two met in person when Burle Marx lectured in Miami in 1979. They became friends, and Burle Marx invited Jungles to visit and shadow him at his Sitio. In an essay in the exhibition’s catalogue, Jungles said, “I would follow him around, whatever he did. I was down there at least once a year… He would stay at our house two to three times a year at least… He knew how to live, he knew how to enjoy every moment of his life, and he was always creating. That’s what gave him joy.”

Discussing Burle Marx’s influence on his own practice, Jungles said, “Roberto was always bringing out the beauty and the natural characteristics of plants. That’s something that’s readily visible in my work… His sense of the bones of the garden—the hardscape, the pavement, the structures—were things that were so powerful that they could stand alone even if the plants were not maintained in the proper fashion. That really impacted me.”

In an interview last week with Metropolis, Jungles said Marx’s “philosophy and stance on the environment are probably needed more now today than ever. To have people experience gardens and nature is needed now more than ever because cities are getting more dense and less livable.”

Visitors to the NYBG, as well as Burle Marx aficionados unable to get there in person, can download a mobile guide to the exhibition. This allows users to create virtual landscape designs in the style of Burle Marx, enjoy a Brazilian music playlist, take a “plant personality” quiz, play a game to learn about and save rain forest plants, and watch videos about plants connected to Burle Marx.