FROM THE ARCHITECTS:
I designed this apartment complex, consisting of about 100 units, in Montpellier in the south of France. In this city with a Mediterranean climate, it is warm enough to eat outside even in the winter, so the local residents spend a lot of time on their balconies and outdoor terraces. The new typology I proposed in this plan, calling for an over 50-meter-high building, was inspired by this type of climate and lifestyle. The idea is extremely simple. Countless, huge balconies extend from the 17-floor apartment building. The structure is linked to a riverside greenbelt, and I did my best to block the sight light from surrounding buildings while giving the volume an organic form. The hundreds of balconies combine with the curved form of the structure, giving the overall building a distinctive appearance, like a huge tree.

In a sense, combining an apartment building with balconies is a very common and conventional technique, but by contrasting the climate, lot, and balconies, it is possible to invent a new, contemporary architectural form. The various lives that spill out onto the balconies create the form of the building, and in the trust sense, this defines the regional identity. 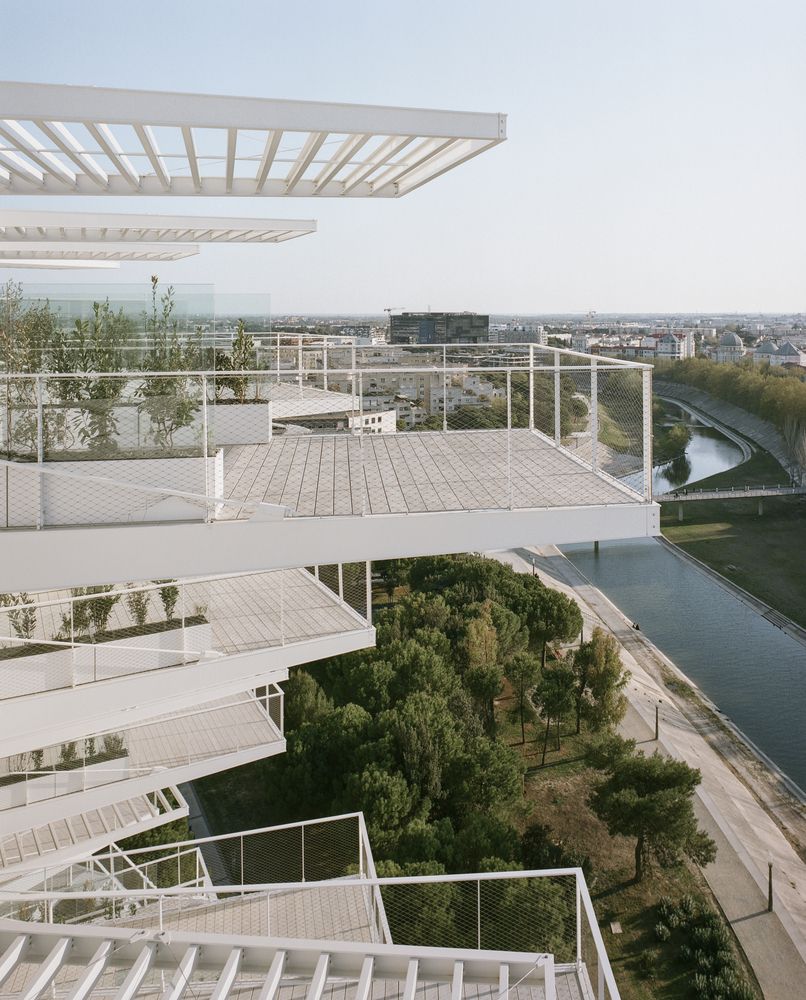 This “Folie Architecturale of the 21st century” was mainly the brainchild of an encounter between Japan and the Mediterranean. The cross-cultural endeavour embodies modern Montpellier. It is also an interchange between two generations of architects, with Japanese firm Sou Fujimoto at the state of its art and the young French generation represented by Manal Rachdi Oxo Architects and Nicolas Laisné Associés. Other firms were brought in to take part in this one-of-a-kind venture: Montpellier developers Promeo Patrimoine and Evolis Promotion, local stakeholders who will ensure this iconic project will represent success for the entire region.

The new multipurpose tower called Arbre Blanc (white tree) is designed for housing, a restaurant, an art gallery, offices, a bar with a panoramic view and a common area. From theproject’s concept phase, the architects were heavily inspired by Montpellier’s tradition of outdoor living. The tower is strategically located between the city centre and the newly developed districts of Port Marianne and Odysseum, midway between the “old” and the new Montpellier.

It is also situated at the crossroads of several thoroughfares: the Lez River, the motorway and the pedestrian/cycling path along the banks of the octroi de Montpellier, or land grant. The project will kick off with a grand gesture to extend a landscaped park along the Lez and stretch out the length of Christophe Colomb Place. The eastern face curves along the edge of the roundabout while the western side on the Lez is convex to create the widest panorama possible. The curvature serves two purposes because this part of the facade offers the best exposure and viewpoint but does not block the view for neighbouring residences.

The building was sited to meld with and defer to its surrounding environment, yet gives it just the right added flair. Arching like a pair of wings hugging the contours of the Lez River down to Pompignane Avenue, Arbre Blanc was intentioned as a natural form that was carved out or sculpted over time by water or wind. It perfectly mimics a tree reshaping itself to grow into its environment yet simultaneously enhancing it by offering much-needed shade.

Despite the name “white tree,” this is by no means an ivory tower. A beat integral to the urban song, the building is destined as a public high-rise built for every soul in Montpellier. The edifice will extend its limbs to all the city’s residents and visitors, from the ground floor restaurant and art gallery to the penthouse bar serving as vista point. This attainable passage will make the tower that much more attractive as a source of pride for Montpellians and a point of interest for tourists. Of all people, the building is unavoidable for its inhabitants, so a common space has been added on to the public bar where all the co-owners from any floor can have a private taste of the scenic view. 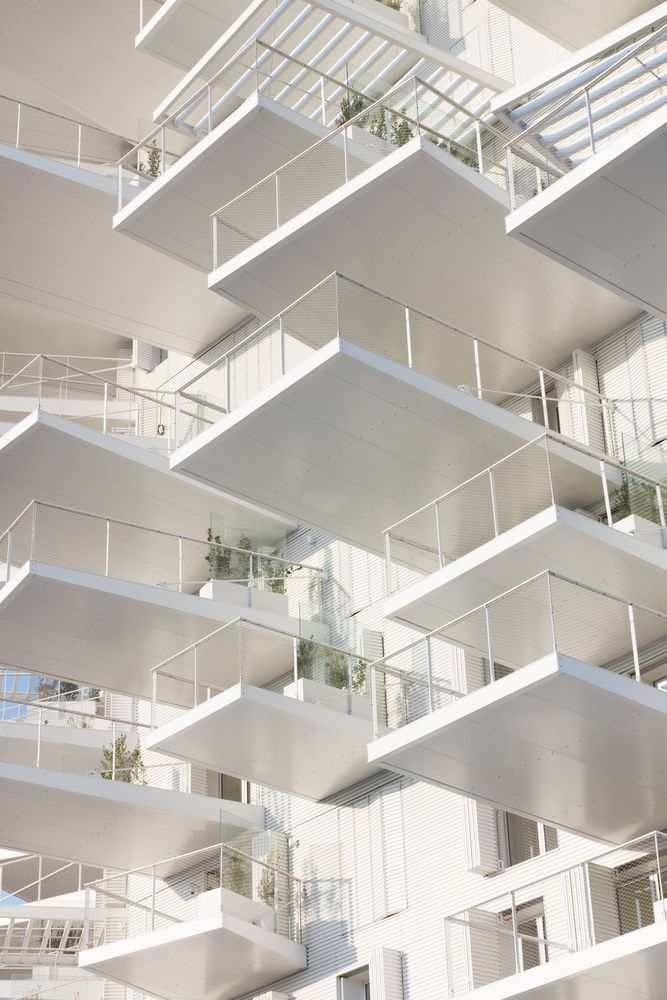 The 17-story high-rise dominates the Montpellier skyline, creating a once-in-a-lifetime opportunity to soak in the breathtaking expanse with a view of the ocean, the Pic Saint-Loup mountains, the sprawling city and the Lez River below.

Arbre Blanc is imbibed with Mediterranean character and Japanese culture alike, with dense yet permeable peripheries where inside and outside join forces, the lines are blurred between room and balcony, uniquely indulgent exterior expanses surrender themselves as full-fledged living spaces. Unparalleled anywhere for its depth and well-provisioned hanging gardens that take up more than half the space allotted for residential units and offer up places to arrange plants, tables, chairs, benches, storage spaces, etc.

Spaces in the flats know no difference between inside and outside – you are free to move through them instinctively. The balconies are proportioned to make you gravitate toward the outdoors, like leaves fanning out to soak up the warm nourishing sunlight.

Rather than an interesting flat, future residents will find a versatile space. Each resident will select a setting (west-facing three-bedroom, southeast two-bedroom, etc.) and a preferred floor plan from a list of possible layouts.

The architects sought to encourage free-choice architecture, which they see as underpinning tomorrow’s housing trend where everyone starts with a “housing stock” when they buy their flat and are not confined to manufactured articles, regimented layouts, turnkey spaces. Instead they are given possibilities, modular interior spaces they can choose from a catalogue of optional features and floor plans.

Just like a tree, the tower will feed off its locally available natural resources to drastically reduce the energy it needs to expend. It will devise passive strategies to induce comfort and use as well as control environmental impacts and scale back emissions.

An unconventional yet dialectical process will passively cool units with solar fireplaces. Arbre Blanc is the tallest “Folie” in Montpellier’s architectural arsenal and is looking become the city’s focal point, a landmark that serves as a lighthouse or guiding star at night amid the regional urban skyline.
An exclusive outlook on the surrounding area, a gift to all the city’s residents and visitors. A starting point from where the vista branches out and your eyes can take it all in: the land’s silhouettes, the open water, the longing it creates for far-off lands and Montpellier’s rich historical heritage.

Erected in a pivotal location for the city, at its core Arbre Blanc is the very symbol of the Mediterranean, the “mid-land sea” that has forever been a crossroads, a meeting point between Europe, Africa and Asia.